This story and photographs appeared on the eve of Holi, March 5, 2015 in Hindustan Times.

“The creator of this entire world is Sri Krishna. But do you know the source of his energy?”

I was sitting at a small teashop in western Uttar Pradesh’s Nandgaon village with the middle-aged Bhudep Prasad Shastri. Otherwise nondescript, this village — situated about 150 km from Delhi — comes to life at the time of Holi.

Mythology says this is the village where Krishna stayed for a few years with his foster father Nanda Baba and mother Yashoda. Nandgaon and the adjacent Barsana, the native place of Radha, is where Holi is played in all its multi-hued glory as villagers re-enact the romantic escapades of the two celestial lovers. The world comes to watch as the Lathmaar Holi is played in all its mythological significance and a large dollop of fun. 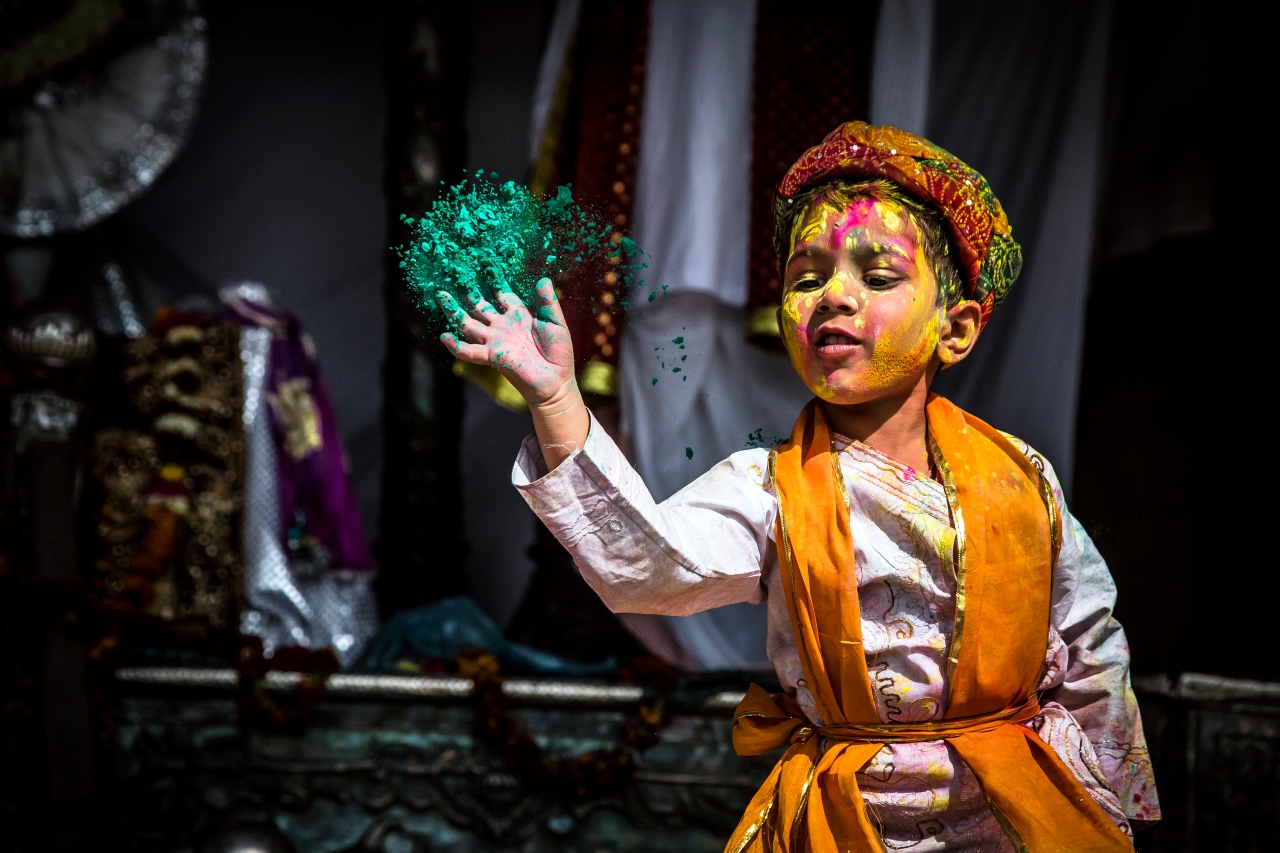 A child sprinkles colours on the gathered pilgrims at the Nandgaon temple.

Radha and Krishna are part of the day-to-day consciousness of these two villages. So when I tell Shastri that I don’t know the answer of his question, I am greeted with disdain.

“Krishna derives his energy from his relationship with Radha! Their shakti came from each other, and that’s why we, the villagers of Nandgaon and Barsana, celebrate their romance so elaborately,” Shastri said.

The two villages, both picturesque with palatial temples on hilltops, are bustling with activity. The festival is celebrated over three days, almost a week ahead of the festival in the rest of the country.

On the first day, transvestites from Barsana—sakhis (Radha’s friends), according to mythology—come to Nandgaon to invite the men—Krishna and his friends—to come and play Holi at their village. The next day, Nandgaon’s men visit Barsana where the women chase and hit them playfully with lathis—popularly known as the Lathmaar Holi. The next day, however, the tables are turned when men from Barsana visit Nandgaon and the latter’s women wield the lathis.

The samaj-gayan (ballad singing session) is underway at Nandgaon’s temple.

It is Nandgaon’s turn today and Shastri is getting late for the procession onto Barsana. Men, dressed in kurtas with pagris (headgears), have come out on the lanes equipped with dhaals (shields) to protect themselves from the sturdy sticks of Barsana’s women.

Shastri prods me to join them. I give in and board one of the shared auto-rickshaws carrying the Nandgaon men. The men sing about Krishna and his love life and discuss how best they can tease the Barsana women.

Just outside Barsana, at a spot called Peeli Pokhar, they finish their preparations – some drink bhang and thandai, while those without a pagri tie one.

A young Nandgaon boy completes his preperation at Peeli Pokhar, while his father ties a pagri for himself.

Devki Nandan, a young boy in his early twenties who is a priest at Nandgaon’s temple, is part of the procession too. Devki didn’t seem to be too upbeat about his priesthood, explaining it as a kind of compromise, since he could do nothing better to support his mother and siblings after his dad died.

The Holi celebration, Devki says, is primarily meant for the Brahmin communities of the two villages. The Jats, he explains, celebrate their own Holi, called Huranga Holi, a few days later.

“In this celebration of ours there is an element of dalliance. It is in the spirit of Radha and Krishna’s relationship. How can a non-Brahmin man share such a feeling with a Brahmin woman?” he asks.

Devki said that when the men enter Barsana, they tease women by singing passion-filled songs and name-calling.

“It’s like a dewar teasing a bhabi,” Devki says. “That’s why the villagers of Nandgaon and Barsana do not inter-marry.”

Young Nandgaon men splash coloured water on the crowd gathered at the temple.

The preparations are complete at Peeli Pokhar, and soon we are all part of a long procession of shield-carrying, traditionally-dressed men marching into the village as Barsana-wallahs shower us with colour from their rooftops and balconies.

The narrow lanes are clogged with people right up to the Radharani temple on the top of a hillock. Media reports estimate the crowd strength to be around one lakh.

At the temple, it is a stampede-like situation and gaining an entry is nothing short of a life and death struggle. Amidst this crowd, the elderly villagers sit facing each other, drenched in colour and singing horis (ballads) about the love of Radha and Krishna.

Outside, the village is jam-packed as people watch women strike the shields of cowering men. The terrace of every multi-storeyed building, every balcony and the roof of every shop — all brim over with people eager to witness the Lathmaar ceremony.

Women mightily hit the shields of cowering men as the Lathmaar Holi gets underway.

But has the immense popularity of the celebration undermined its spiritual element? That is the view of an independent filmmaker whom I meet on the terrace of the temple in Nandgaon next day. It is Barsana’s turn to visit and the temple terrace has been taken over by photographers and film-makers.

The village looks like a pack of colourful match-boxes from the top. Through the crevices between these box-like houses you could see pilgrims approaching the temple through the lanes. Within an hour, the temple would turn into an action-packed arena where women would be mercilessly splashed with coloured water and the samaj gayan (ballad singing) would echo.

“It’s really wonderful how the villagers here are reliving the mythological tales, but I wonder if, with time, the spiritual element of the celebration is lost,” the filmmaker, a regular visitor here every Holi, says.

“You see these tourists and photographers—most of them are here only to witness the crazy colour-splashing without caring much about the myths. Actually, commercialisation has taken over a bit.”

I nod, “But the spirit of the myths seems to be intact among the villagers …”

My words are drowned by euphoric cries that fill the air. The Barsana men have entered the temple and crazy water attack is underway. I put my camera on a continuous mode and don’t look away from the eye-piece for the rest of the evening. 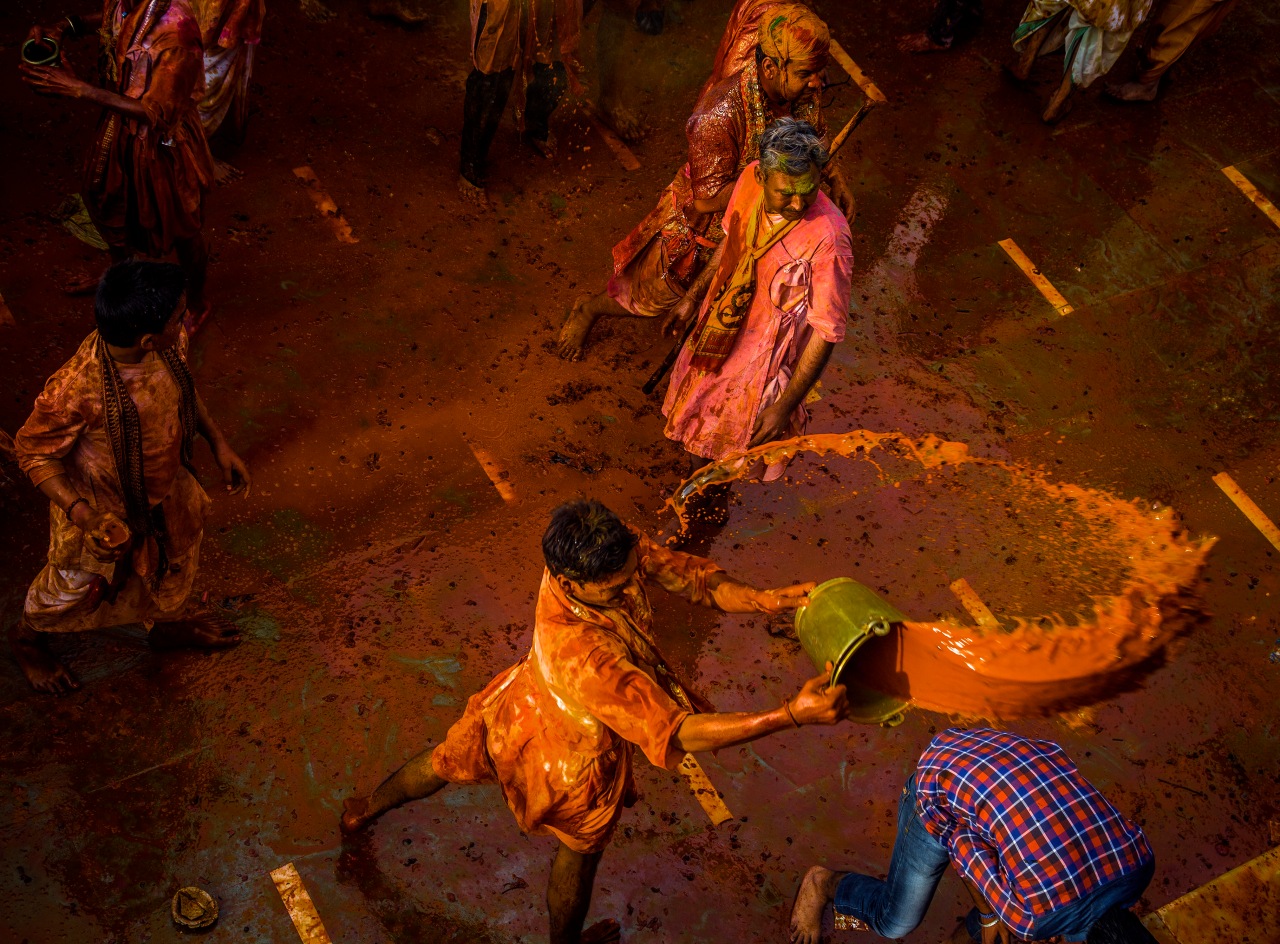 As men from Barsana enter the Nandgaon temple on the second day of the celebration, a crazy water-splashing session ensues.