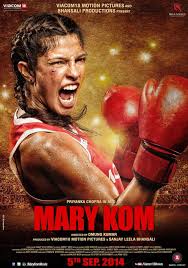 The trailer of an upcoming biopic on the life of Mary Kom, a five time World Amateur Boxing champion, who shot to fame with a bronze in the 51kg category event in 2012 Olympics, has just been released. With the social media abuzz about it, the trailer has registered nearly 4 million hits on You Tube in two weeks. Directed by Omung Kumar and produced by the acclaimed director Sanjay Leela Bhansali, the movie is slated for a September release this year.

The trailer starts off with how adversarial Mary’s family and friends in Manipur were regarding her pursuing training in boxing. It then takes off, with the aide of attractive cinematography and background music, to show how Mary begins her training, gets hit, loses and then, wins. In the meanwhile, she falls in love, marries, and even mothers twin sons. The trailer takes a sharp turn when, after a certain high, Mary’s career begins to ebb. Nonetheless, as with the story of every successful champion, so does MC Mary Kom rise and show the world that a mother of two, a wife, a girl from ‘Manipur ki choti si gaon’, can win an Olympic medal.

However, there is something elementally amiss about the biopic–it’s the casting of Priyanka Chopra, an actress with North Indian origins, as a Manipuri woman. The actress speaks in a highly synthetic accent in the film which is basically a stereotype of how most East Indians speak Hindi, confusing the genders. Of course, Ben Kingsley played Gandhi in the Oscar-winning Richard Attenborough film. But then, there was no attempt at making Kingsley speak Hindi in bits and make a caricature out of it, whatsoever. In Bollywood, Sujoy Ghosh’s Kahaani, is a good example of how an Indian film can assimilate two languages and cultures, without portraying any sort of stereotypes. In the National Award winning thriller, Vidya Balan and Nawazuddin Siddiqui play characters who are native Hindi speakers, while Parambrata Chatterjee plays a Bengali police officer, and they all blend brilliantly in the plot that unfolds in Kolkata. If Priyanka Chopra is indeed the best choice to play the boxer, then why not make a biopic in Hindi? Why this half-hearted attempt at cultural assimilation which ends up strengthening nothing but a bunch of clichés about the tribal communities of the Northeast?

Mary Kom, the film, is highly susceptible to a complete absence of genuineness, lack of an honest portrayal, which is so very important for any piece of art, because of the huge gap that has crept into the portrayal of the lead character.  In contrast, it can be noted that both Vittorio De Sica (in The Bicycle Thieves) and Satyajit Ray (in Pather Panchali) had gone to the extent of taking non-professional actors as leads, for the sake of making art at its genuine best. But here, we have a remarkable Indian film maker, who is known for churning out arty hits like Guzaarish and Black, shying away from casting a non-mainstream actress (a Manipuri in this case).

Bhansali and Co’s defence for choosing Priyanka Chopra can of course be the star’s bankability, which obviously is much stronger than a relatively unknown north-eastern actress. But then, Hansal Mehta did make Shahid, not with Salman Khan, but Raj Kumar Yadav, a comparatively lesser known actor who later bagged a National Award for his role in the biopic on lawyer Shahid Azmi. Similarly, Nawazuddin Siddiqui became a household name only after Anurag Kashyap let him play one of the most important roles in Gangs of Wasseypur. Directors and producers of repute, Mr Bhansali must know very well, often make films taking a newbie suiting the purpose best, who then go on to achieve both commercial and critical success.

At a time, when society is reeling under racial prejudices against people from the Northeast, a biopic on Mary Kom, with a Manipuri heroine in the lead, would have provided an excellent platform to make a move towards cultural inclusion of the Northeast in mainstream Indian cinema. It might have helped, to a great degree, in overcoming the fractured narratives about the Northeast that are so widespread in the rest of the country. It might have dispelled, to some extent, the apathy that a section of society harbours against some of their fellow countrymen based solely on racial prejudices.

Bhansali and his team have clearly given the opportunity a blithe miss.

*
The article was published in the Hindustan Times website on August 8, 2014.